“Hearts are not to be had as a gift, hearts are to be earned.”

I know what you’re thinking… Why is SuperJeweler talking about Claddagh rings in February?  This is Valentine season not St. Patrick’s Day. Ah, but wait, because while they’re definitely a symbol of Irish pride, Claddagh rings also represent the very best of romance.

The history and origin of Claddagh rings:

Beginning in the mid-thirteenth century, The Tribes of Galway (Treibheanna na Gaillimhe) consisted of several prominent Catholic merchant families from the region of and surrounding Galway in Western Ireland. The families of Athy, Blake, Bodkin, Browne, D’Arcy, Font, French, Joyce, Kirwin, Lynch, Martin, Morris, and Skerrett dominated the financial, political, and social landscape of the region right up to the Irish Rebellion of 1641. Having supported the Confederate Catholics of Ireland, the families faced punishment for their rejection of British rule after Cromwell’s invasion of Ireland in 1649. The details of his circumstances are fuzzy. It would seem, however, due to this familial fall from grace, Richard Joyce, found himself an indentured servant bound for the West Indies in 1675 – a voyage that would take the ship around the then-treacherous northern coast of Africa.

Spanning the 16th to 19th centuries, a group of privateers called the Barbary pirates or the Ottoman corsairs operated out of ports in Rabat, Algiers, Tunis, and Tripoli. Tales of these pirates and the fear they induced in Europe during this period have been chronicled in such classics as Robinson Crusoe [Daniel Defoe], The Count of Monte Cristo [Alexander Dumas], and the captive’s tale in Don Quixote [Miguel de Cervantes Saavedra].

The group, which in turns was supported by various European nations for carrying out attacks against their enemies, seized ships and goods in addition to the raiding of coastal towns in Europe and as far away as Iceland. It’s primary purpose, though, was the capture of Christians to be used as slaves for the Ottoman Empire. Those lucky enough to have family wealth or the community status to raise funds for ransom would be returned home – those who could not provide money for release were sold into slavery in a variety of trades. Such was the fate that awaited Richard Joyce as he journeyed to the West Indies in the mid 1660’s. The ship he was aboard was intercepted by pirates, and Joyce was taken captive. Unable to raise the money required for his release, he was sold at auction. Purchased by a goldsmith in the city of Tangiers in northern Morocco, he was made an apprentice and spent the next fourteen years of his life in servitude learning the goldsmith trade.

In 1689, upon the growing strength of the British navy, King William III of England was able to demand the release of all British subjects captured by the Algerians who were being held as slaves. Joyce’s master is supposed to have offered him half of the business and his daughter’s hand in marriage if he would agree to remain in Tangiers. The offer was declined and Joyce chose to return to Galway. According to legend, he arrived home with the Claddagh ring he designed and crafted while in captivity – giving it to the sweetheart he left behind as an engagement ring. Using the trade he learned during his time in Morocco, Richard Joyce became a successful goldsmith in his own right in his native Ireland.

The uses and symbolism of Claddagh rings:

Inspired by “fede” or fealty rings dating back to ancient Rome; Joyce supposedly designed the ring to represent the combined concepts of loyalty, friendship, and love. During the ornate Victorian period, these rings surged in popularity, not only in Ireland, but in the rest of the UK, the United States, and Canada. Claddagh rings have been gifted as engagement rings, wedding bands, friendship rings, and heirlooms passed from mother to daughter. 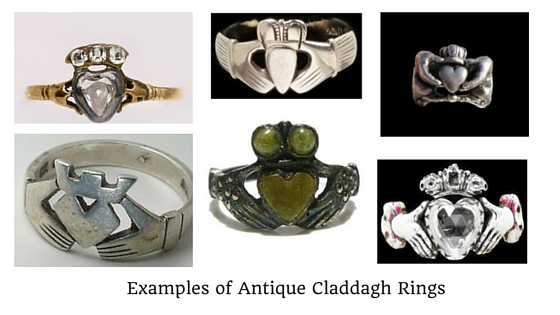 Over the years, Claddagh rings have developed a storied symbolism that varies from region to region. One of the most popular is the meaning indicated by the way in which the ring is worn. If the Claddagh ring is worn on the right hand, crown down, the individual is single and in search of love; crown up he or she is taken. On the left hand the crown down symbolizes engagement, while the crown up indicates marriage.

Of course, this is only one use for the Claddagh ring. It’s also associated with the Irish motto, “Let love and friendship reign,” and is often given as a sign of trust and loyalty from friend to friend.

Win a Claddagh Ring of your own from SuperJeweler:

SuperJeweler.com offers an array of different Claddagh rings in nearly any gemstone you could want! These are just a few of my favorites from our stock – but check out the rest of the collection here. For a limited time, you can receive an additional 15% off the already low price of the Claddagh ring of your choice by using the coupon code: FACEBOOK15

Best of all, from now until Valentine’s Day SJ is giving you the chance to win a gorgeous emerald and Ruby Claddagh Ring in Sterling Silver! Simply leave a comment below, letting us know what you think of Claddagh rings for Valentine’s Day – and you’ll be automatically entered to win. Contest closes at midnight February, 15th. Winner will be announced February 17th. See general contest rules here.

Thanks for reading and good luck!

The Magnificence of Earth-Created Diamonds
August 7, 2019